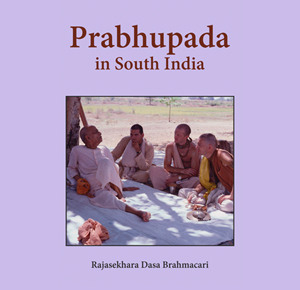 Prabhupada in South India is the first book to comprehensively cover Srila Prabhupada’s pastimes in the southern India peninsular.

Join Rajasekhara Dasa Brahmacari, an early Prabhupada disciple and international author, as he takes you on an adventerous devotional journey where Srila Prabhupada and his disciples defeat the philosophical challenge of numerous mutts and panditas and establish the supremacy of Krishna consciousness. Relish heartfelt narrations of people—students, doctors, industrialists, statesmen, spiritualists—who have been deeply touched by Srila Prabhupada.

We need your help in meeting these expenses.

Donate :
Your donation will help in subsidising the cost of the book.


Special gift for your donation:
You will receive a special copy of the book autographed by Rajasekhara Prabhu shipped to your address.


Prabhupada in South India is published by Srila Prabhupada Foundation, a charitable trust registered in Vrindavana. Proceeds from the sales will support the preservation and propagation projects of Srila Prabhupada Lila.