As Srila Prabhupada was leaving with his disciples, a group of Indian faculty members and students came and stood around him, speaking rapidly, challenging him.

One student, espousing the philosophy of monism, asserted that the highest expression of the Absolute Truth was that "All is One." Prabhupada tried to make him understand that simply oneness was a rudimentary idea, because from that "one" come so many variegated manifestations. But the man would not accept defeat, and Prabhupada became excited arguing with him. Taking the man by the shirt collar, Prabhupada shouted, "You say everything is one! But is this cotton shirt the same as a cotton ball? Why don't you wear a cotton ball instead of this shirt?"

What is true religion? 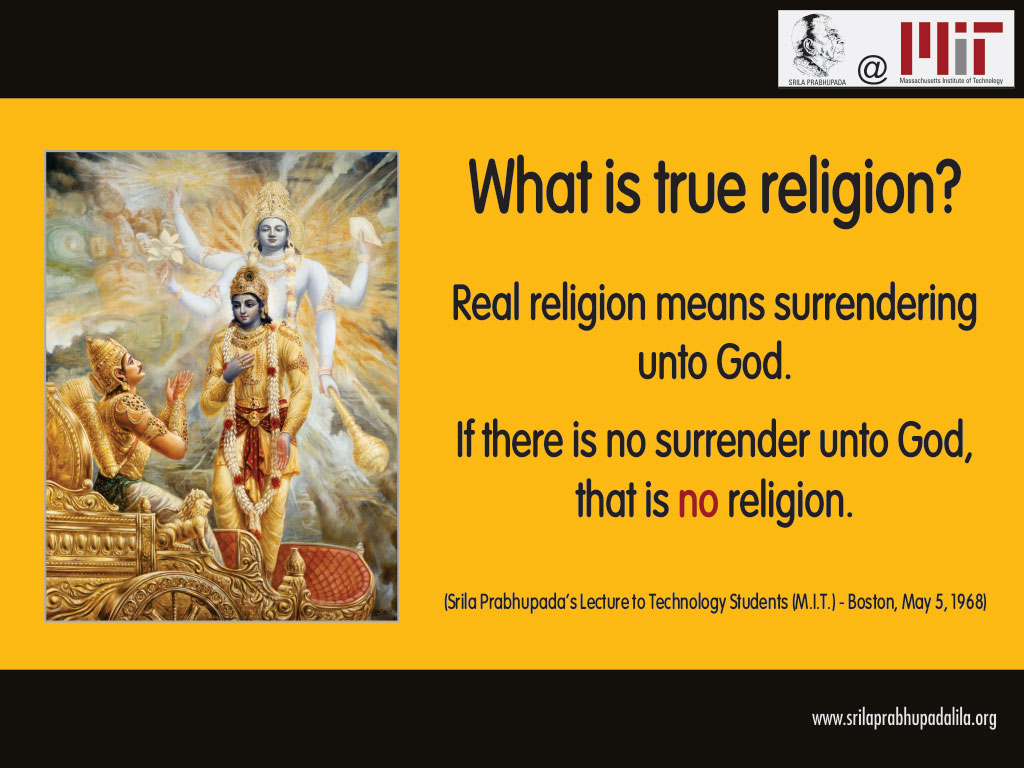 How is Krsna consciousness different from other religions? 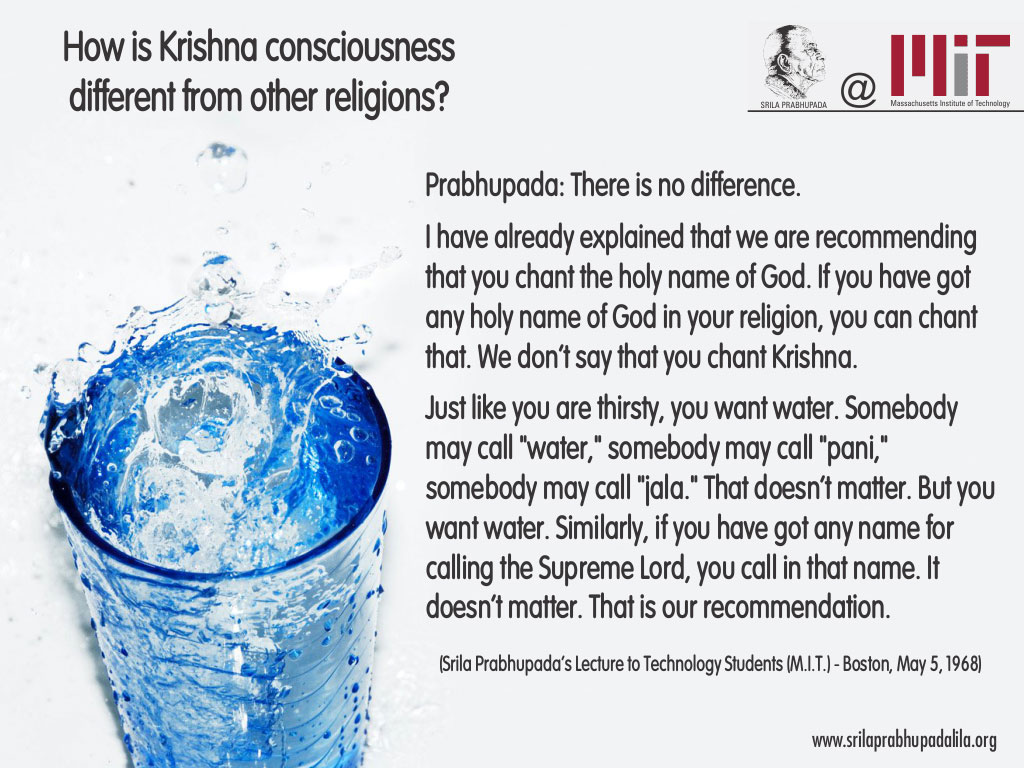 So Krsna consciousness means that if we want, if we are actually educated, then we must try to question that "Why I am suffering?" This is called brahma-jijnasa. In the Vedanta-sutra the first aphorism is athato brahma jijnasa. One should inquire about his existence as soul, not as body or as mind. Because he is neither body nor mind. So this Vedanta-sutra says that athato brahma jijnasa. Atha atah means this is the time, this human form of life, developed consciousness, with greater intelligence than the animals, one should inquire about his spiritual existence. That is real technology. 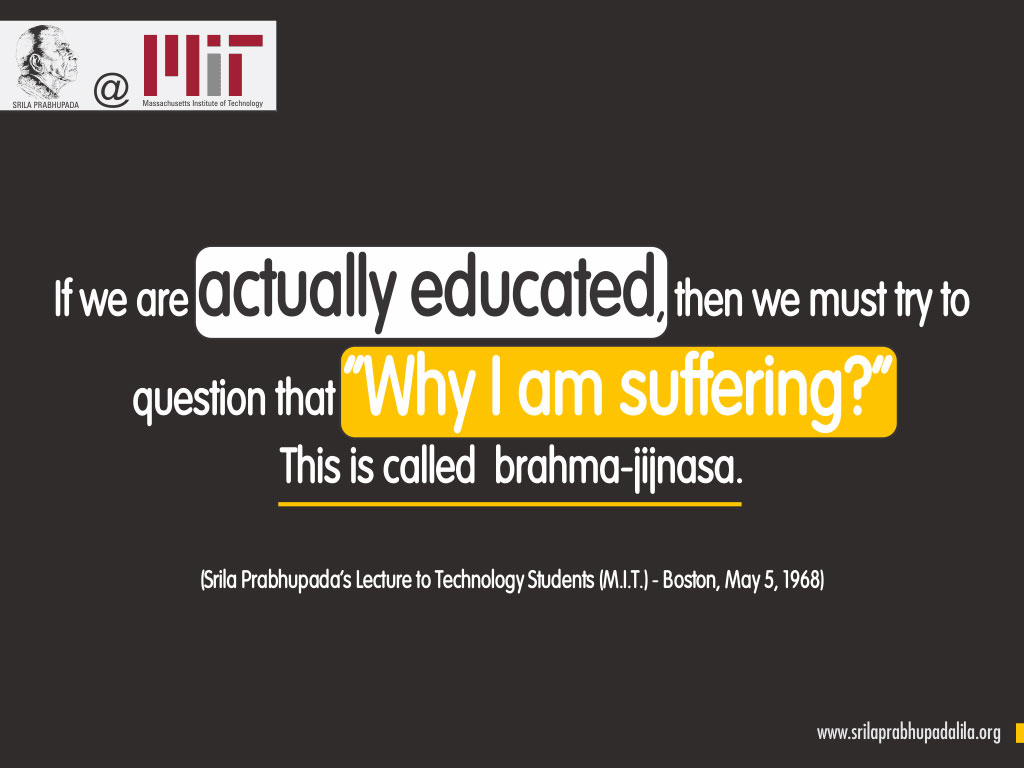 First thing is by chanting your misconception of life will be cleared. At the present moment I am thinking that "I am this body," and therefore, because my body is born in this land, therefore I am thinking, "I am American." And because I happened to take my birth in a certain family, so I am thinking, "I am Christian" or "Hindu." But all these things are designations. When we clear the misconception of my life, then I can understand that I am pure soul, aham brahmasmi. The Vedic language says that "I am spirit soul." And as soon as you understand, then brahma-bhutah prasannatma na socati na kanksati [Bg. 18.54]. As soon as you realize yourself as soul, then you become immediately free from all anxieties, prasannatma. Prasannatma means jolly. 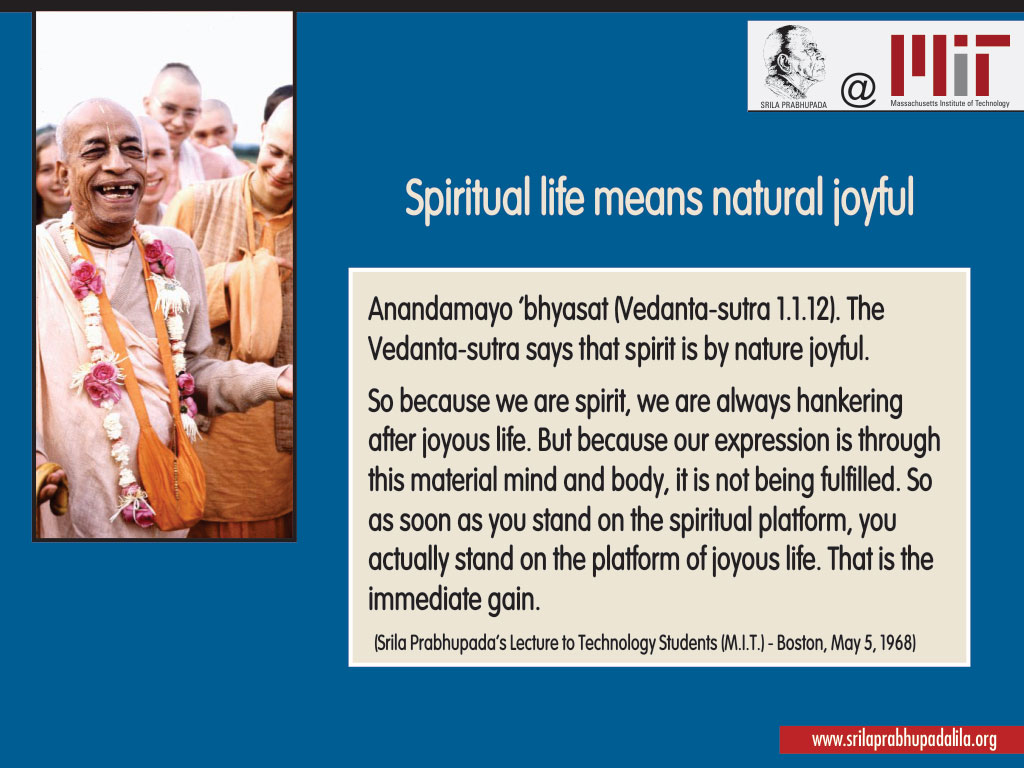 The Indian technologists surrounded Prabhupada, raising their voices and arguing, while Prabhupada's disciples looked on anxiously. Govinda dasi warned the devotees about Swamiji's health, and Brahmananda and the others smoldered at the offensive Indians. This wasn't the way to speak with a sadhu.

Meanwhile, a devotee reported that Prabhupada's car had broken down, and someone ran out into the street to get a taxi. The arguing continued. When a taxi finally arrived, a few disciples pushed through the arguers, insisting, "Swamiji, please, your taxi is waiting. It can't wait any longer. You have to go." And they disengaged their spiritual master from the mass of arguing technologists. Prabhupada considered the evening a success.