Preparing for the Sunday Love Feast

Back in August of 1965, Srila Prabhupada, the founder and spiritual master of the International Society for Krishna Consciousness (ISKCON), was crossing the Atlantic aboard the steamship Jaladuta. At that time there was no worldwide Hare Krsna movement. But Srila Prabhupada was crossing the ocean to carry the message of Krsna consciousness to the Western world. For days he'd been feeling seasick and dizzy, yet on August 20, the appearance-day anniversary of Lord Krishna, he spoke to the crew about Lord Krsna's philosophy and fed them prasadam (food offered to Krishna) that he'd cooked himself.

And later, in America, Srila Prabhupada regularly cooked and distributed prasadam - to his suburban hosts near Pittsburgh, to a hatha-yoga teacher in uptown New York, to the guests who attended his evening lectures, and to the hungry spiritual seekers who began coming to his New York storefront for lunch each day. But it wasn't until Srila Prabhupada had been in America for a year that he began the "Love Feast." 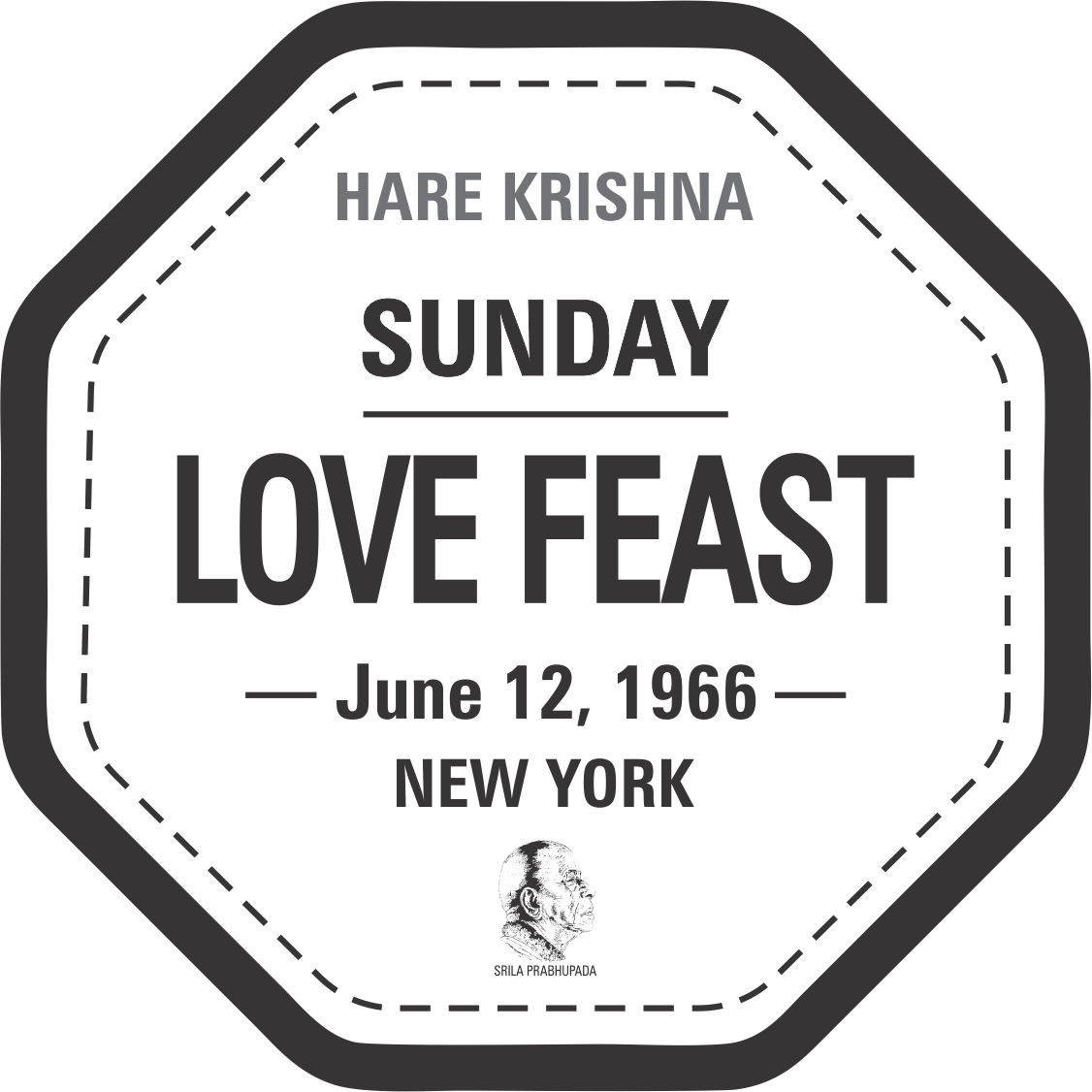 Late one Saturday night in the summer of 1966, some volunteers gathered to help the Swamiji (as Srila Prabhupada was addressed then).

It was 11:00 P.M., and only one light was on in Swamiji's apartment-in the kitchenette. Swamiji was staying up, teaching Kirtanananda and Brahmananda how to cook, because the next day (Sunday) they would be holding a feast for the public. Kirtanananda had suggested it be advertised as a "Love Feast," and Swamiji had adopted the name, although some thought it sounded strange at first to hear him say "Love Feast." The devotees had put up posters around the neighborhood and had made a sign for the window of the storefront, and Swamiji had said he would cook enough for at least fifty people. He said the Love Feasts should become an important part of ISKCON. As he had explained many times, food offered to Krsna becomes spiritual, and whoever eats the prasadam receives great spiritual benefit. Prasadam meant "mercy."

His two helpers stood respectfully beside him, sometimes stepping back out of his way as he moved and sometimes looking over his shoulder as he mixed spices or set a pan over the flame or called for another ingredient. He was stirring a big pot of sweet rice with a wooden spoon-it had to be stirred constantly-and slowly adding milk. If the sweet rice burned, it would be ruined, he said, and he handed the spoon to Kirtanananda. He next showed them how to make ghee by heating butter in a wok and separating the milk solids from the butterfat. And he simultaneously taught them how to make apple chutney. 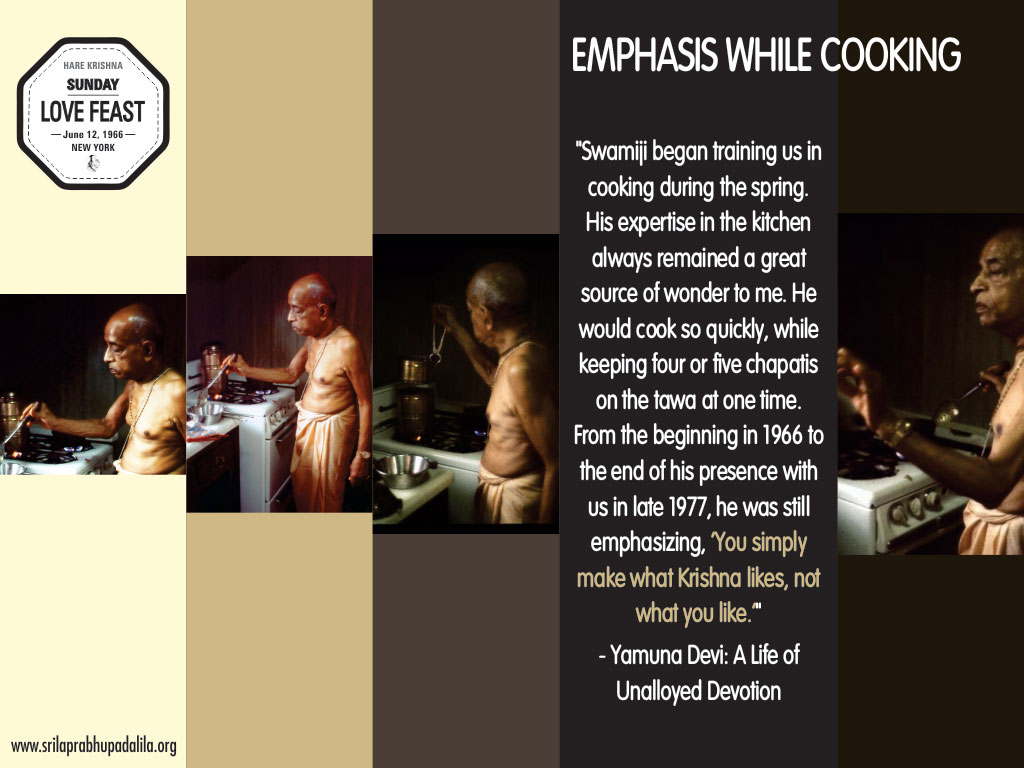 Prabhupada was silent as he cooked. But when Brahmananda asked him how he had learned so much about cooking, Prabhupada said that he had learned by watching his mother. He laughed and said it had not been like it is in the West, where you take a lump of flesh from your refrigerator, throw it in a pan, boil it, sprinkle it with salt, and then eat like an animal. And in Korea, he said, they eat dogs. But human beings should eat grains, fruits, vegetables, and milk; and the cow, especially, should not be killed.

While Brahmananda cut the apples for the chutney and put them in a pot for steaming and Kirtanananda stirred the sweet rice, Swamiji prepared masala-the basic mixture of spices-which he would soon add to the steaming apples. The familiar smell of red pepper and cumin seeds entered their nostrils sharply as the masala crackled and smoked in the hot ghee in the tiny frying pan. With three separate operations going at once-sweet rice, steaming apples, and masala-Prabhupada cautioned Kirtanananda to stir the sweet rice steadily and scrape the bottom of the pot, and he took the spoon for a moment from Kirtanananda's hand and demonstrated how to stir it properly. Sweet rice, chutney, and certain other dishes could be made in advance of the feast, he explained, but many things would have to be done the next morning.

Next: The Sunday Love Feast