Prabhupada’s eagerness to preach in Moscow

In May 1971, Srila Prabhupada prepared for extensive world travel. Although his itinerary was indefinite, his general plan was to travel widely for a few months, then tour the U.S., visit London, and then return to India. He had sent disciples to Australia and Malaysia, and he wanted to visit them. He also wanted to go to Moscow and was awaiting a letter of permission from the Soviet government. As he had spread his movement in America, visiting major cities and preaching and then stationing a few faithful disciples there to carry on, he now expanded his field to include the whole world.

I travelled all over the earth fully satisfied and without being proud or envious... I do travel everywhere, by the Grace of the Almighty Vishnu either in the transcendental world or in the three divisions of the material world without any restriction because I am fixed up unbroken in the devotional service of the Lord. I do travel as abovementioned by constantly singing the glories of the Lord in transcendental message by vibrating this instrument of Vina charged with transcendental sound and given to me by Lord Krishna.

Having preached a year in the Eastern Hemisphere, Prabhupada was eager to return to the West, and he planned to fly to Moscow and on to Europe.

For months Prabhupada had been planning to visit Moscow with a desire to preach to the Russian people. He had already been corresponding with a Russian Indologist Prof. Kotovsky. His disciple Krsna dasa in West Germany, with the help of a Dr. Berndhardt of the University of Hamburg, had obtained the names of other Russian scholars of Indology. Srila Prabhupada had coached Krsna dasa on how to best cultivate the Russian Indologists. 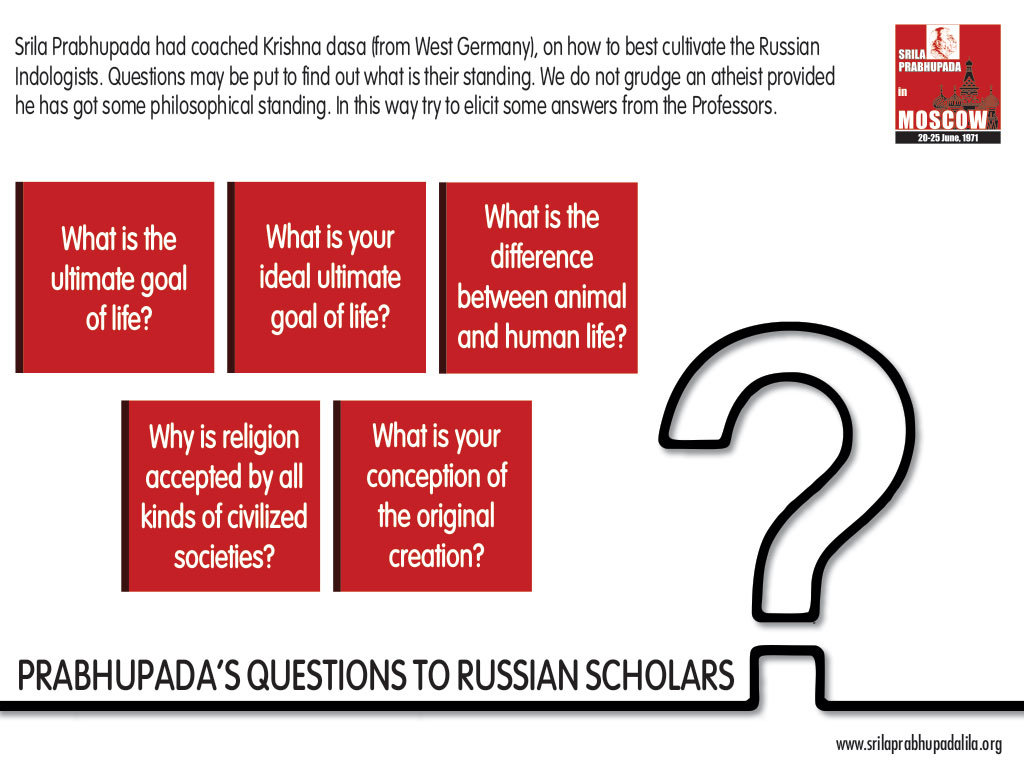 For Prabhupada and his traveling companions, Syamasundara and Aravinda, getting tourist visas for Russia was simple. They would take a five-day, government-controlled tour, with every activity planned by the Soviet Tourist Bureau and everything paid for in advance.

Prabhupada, his secretary, and his servant cleared Soviet customs and immigration quickly and smoothly, and a government tourist guide escorted them by limousine to the Hotel National. The hotel, near Red Square, Lenin's Tomb, and the Kremlin, was expensive but plain. Prabhupada found his room dingy and cramped, with barely space for a bed and two chairs. The room for Syamasundara and Aravinda was far away, and Prabhupada decided that Aravinda should share the room with him instead, crowding Prabhupada's room all the more.

Aravinda told the hotel manager that they would not eat the hotel fare, but would have to cook their own meals. The manager refused at first, but finally allowed them use of the maid's kitchen.

Prabhupada remained peaceful and regulated, keeping to his daily schedule. He would rise early and translate, and in the cool of early morning he would go out for a walk through the all-but-deserted streets. Prabhupada, wearing a saffron cadar, strode quickly, Syamasundara sometimes running ahead to photograph him. 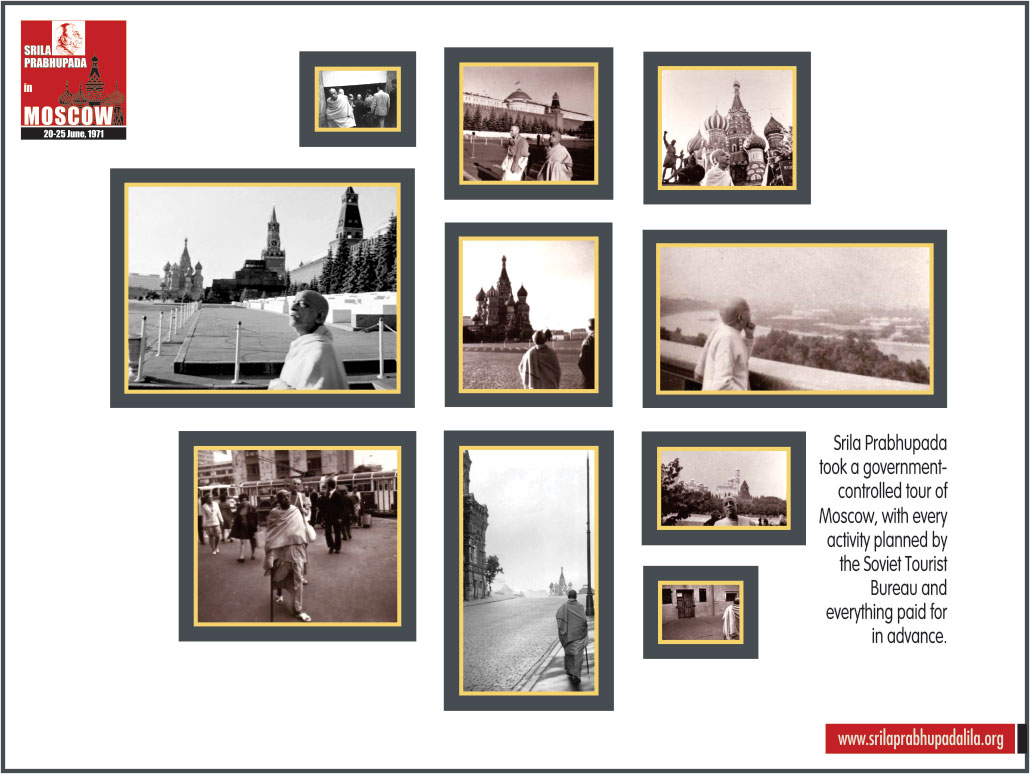 As they would pass Lenin's Mausoleum a queue would already be forming. "Just see," Prabhupada commented one morning, "that is their God. The people don't understand the difference between the body and the spirit. They accept the body as the real person."

Prabhupada appreciated the sparseness of the traffic-some trolleys and bicycles, but mostly pedestrians. As he walked among the old, ornate buildings, he saw elderly women hosing the wide streets-a good practice, he said. The Russian people appeared to live structured, regulated lives, much more so than the Americans. These simple, austere people, unspoiled by the rampant hedonism so common in America, were fertile for Krsna consciousness. But devoid of spiritual sustenance, they appeared morose.