After only three days, Prabhupada's mission in Moscow seemed finished. The meeting with Professor Kotovsky over, what was left? The government would allow nothing else. It had not allowed him to bring in books, and now he had been refused the opportunity to speak publicly. Foreigners were not to talk with the Russians. He could go nowhere, unless on an accompanied tour. So with no preaching and no prospects, he stayed in his cramped room, taking his massage, bathing, accepting whatever food Syamasundara could gather and cook, dictating a few letters, chanting Hare Krishna, and translating Srimad-Bhagavatam.

One day two young men, one the son of an Indian diplomat stationed in Moscow, the other a young Muscovite, were loitering near Red Square when they saw an amazing sight. Out of the usual regimented routine of city traffic, a tall young man with a shaved head, a long reddish ponytail, and flowing white robes approached. It was Syamasundara. Familiar with Syamasundara's dress, the son of the Indian diplomat stopped him. Syamasundara smiled. "Hare Krishna, brother." And he began talking with the Indian, whose name was Narayana. The Russian, Ivan, knew a little English and followed the conversation as closely as he could. The talk grew serious.

"Why don't you come up and meet my spiritual master?" Syamasundara asked. Honored, the boys immediately accompanied Syamasundara to the Hotel National. When they arrived, they found Prabhupada seated on his bed, aglow and smiling, Aravinda massaging his feet. Syamasundara entered, offering obeisances before Prabhupada. Ivan was completely fascinated.

"Come on," Prabhupada said, and the three of them sat at Prabhupada's feet. Turning first to Narayana, Prabhupada asked his name and his father's occupation. Narayana liked Prabhupada and offered to bring him green vegetables; his father, being highly placed at the Indian Embassy, had produce flown in from India.

Ivan was interested even more than his Indian friend, and Prabhupada began explaining to him the philosophy of Krishna consciousness, while Narayana helped by translating. Ivan inquired with respect and awe, and Prabhupada answered his questions, teaching as much basic information about Krishna consciousness as was possible in one sitting. Prabhupada explained the difference between the spirit soul and the body and described the soul's eternal relationship with Krishna, the Supreme Personality of Godhead. He spoke of Bhagavad-gita, of his network of temples around the world, and of his young men and women disciples all practicing bhakti-yoga.

Prabhupada mentioned his desire to preach in Russia, which was a great field for Krishna consciousness because the people were openminded and hadn't been polluted by sense gratification. He wanted to introduce Krishna conscious literature in Russia through a library or a reading room or in whatever way possible. Krishna conscious philosophy, he said, should be taught to Russia's most intelligent people, but because of government restrictions it would have to be done discreetly. Devotees would not be able to sing and dance in the streets, but they could chant quietly together in someone's home. Prabhupada then began singing very quietly, leading the boys in kirtana. 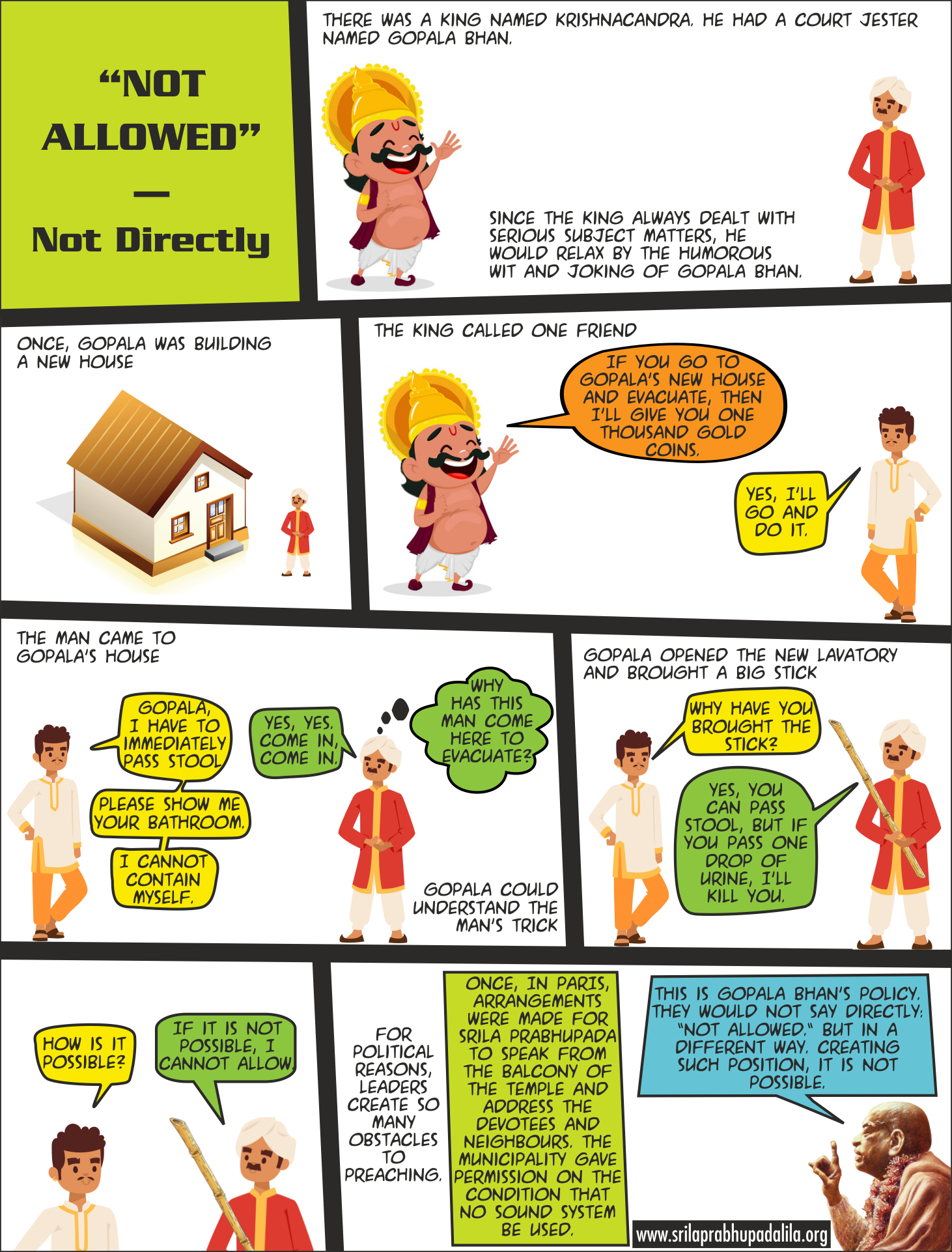 Ivan's taking to Krishna was like a hungry man's eating a meal. After several hours, however, he and his friend had to go. They would return the next day.

Syamasundara began spending time with Ivan and Narayana. Ivan, a student of Oriental philosophies, was very intelligent and eager to know what was going on in the outside world. He was fond of the Beatles, and Prabhupada told him of his association with George Harrison and John Lennon. Ivan and Syamasundara had long talks about the ambitions and hopes of young people outside Russia, and Syamasundara explained to him how Krishna consciousness was the topmost of all spiritual paths. Syamasundara also taught him basic principles of bhakti-yoga, such as chanting the prescribed sixteen rounds of japa daily, and gave him his own copy of Bhagavad-gita As It Is.

Prabhupada showed Ivan how to prepare capatis and rice and asked him to give up eating meat. Joyfully, Ivan accepted the chanting, the new way of eating-everything. Ivan was being trained so that after Prabhupada left, Ivan could continue on his own. Ivan would be able to feel himself changing and advancing in spiritual life, and after practicing for some time he could be initiated. Ivan said he would tell his friends about Krishna consciousness. With only two days left in Moscow, Prabhupada taught Ivan as much as he could. In this young Russian's eagerness and intelligence, Prabhupada found the real purpose of his visit to Russia. Srila Prabhupada thus initiated him into spiritual life, giving him the name Ananta-santi Dasa. 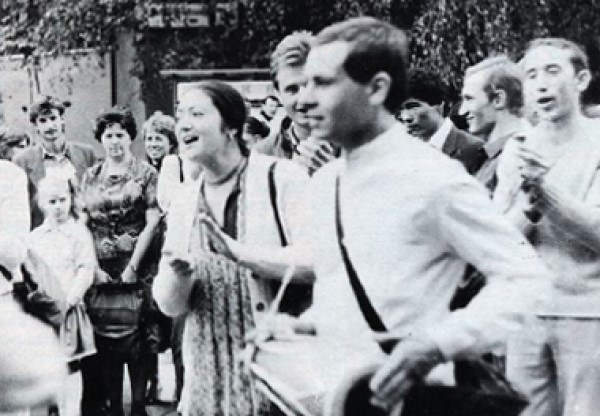 For the next ten years, Ananta-santi traveled widely throughout the Soviet Union, preaching what he had learned from Srila Prabhupada and what he read in Prabhupada's books. In April of 1982, Ananta-santi was arrested by the K.G.B. and charged with "parasitism." He was incarcerated in Psychiatric Hospital No. Five in Moscow, escaping one month later. He continued his Krishna conscious mission for a year before he was again arrested.

He receives heavy doses of neuroleptics, and this causes him to suffer greatly. His wardens refuse even to relieve him of the drug's severe physical and psychological side effects. His body is swelling and his once sharp mind is growing dull.

Other devotees of Krishna in the Soviet Union have suffered similar injustices. Olga Kiseleva (Premavati dasi), a graduate of the Philological Faculty of Moscow State University and the mother of two young girls, was arrested in August of 1983 while nine months pregnant with a third child. Premavati was taken to Matroskaya Tishina State Prison in Moscow. Her diet there was poor, and other prisoners attacked and beat her. Her baby was born with a heart defect and died eleven months later. Premavati is now a prisoner in a Soviet labor camp and is scheduled to be released on August 29, 1988.

The efforts of Ananta-santi dasa, Premavati dasi and other courageous Krishna conscious pioneers in the Soviet Union have not gone in vain. Tens of thousands of devotees now chant Hare Krishna, worship Krishna as the Supreme Person and practice the principles of spiritual life in Russia.

Srila Prabhupada had brought the movement of Lord Caitanya to yet another country. Caitanya Mahaprabhu Himself had predicted that the sankirtana movement would go to every town and village, yet for hundreds of years that prediction had remained unfulfilled. Prabhupada, however, in the few years since his first trip to America in 1965, had again and again planted Lord Caitanya's message in one unlikely place after another. And of all places, this was perhaps the most unlikely; during a brief, government-supervised visit to Moscow, he had planted the seed of Krishna consciousness within the Soviet Union. He was like the needle, and everyone and everything connected with him was like the thread that would follow.

Professor Kotovsky had remarked that Prabhupada's stay in an old-fashioned hotel would not prove very interesting. But Prabhupada, unknown to Professor Kotovsky, was transcendental to Moscow or any other place in the material world. Prabhupada had come to this place, and Krishna had sent a sincere soul to him to receive the gift of Krishna consciousness. This had happened not by devious espionage against the Soviet government but by the presence of Krishna's pure devotee and his natural desire to satisfy Krishna by preaching. In response to Prabhupada's pure desire, Krishna had sent one boy, and from that one boy the desire would spread to others. Nothing, not even an Iron Curtain, could stop Krishna consciousness. The soul's natural function was to serve Krishna. And Krishna's natural will was to satisfy the pure desires of His devotee.